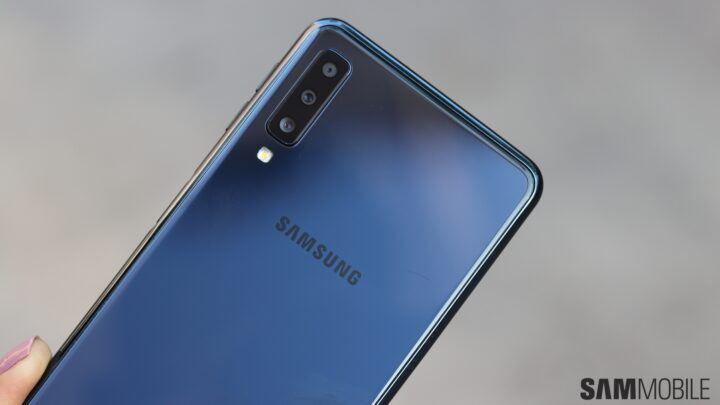 The Experience UI 9. We have ample experience with the UI by now and find it quite agreeable. Also, Samsung will be bringing some additional features including gesture navigation in the Experience UI This is kind of disappointing considering the A7 variant had full-fledged Samsung Pay. The handset includes a mAh battery and we are getting a comfortable one-day mileage with moderate to heavy usage. Fast charging is not supported. The Samsung Galaxy A7 includes three cameras on the rear and one on the front are we finally moving away from the selfie marketing pitch?

The primary 24MP rear camera is a very good performer for its price. The shots that we clicked outdoors show a wide dynamic range and sharp details.


The background blur is adjustable and looks awesome when things click. Edge detection needs to get better, though. You can switch to the third 8MP sensor from the camera app to capture wide-angle shots. Besides, the low resolution 8MP for wide-angle shots could be a problem, and the wide-angle lens is also fixed focus. For selfies, there is a 24MP sensor up front. The portrait mode is available for both rear and front cameras. The optimization is, thankfully, not as aggressive. Note: These camera samples have been resized for web. You can check the full resolution samples in this flickr album.

Samsung Galaxy A7 starts at Rs. We can see that Samsung is finally pushing itself to pass on more aggressive hardware, at least in the mid-range segment. The Galaxy A7 is better looking and more comfortable to handle compared to the other better-specced competitors that it challenges. Or, even one. I heard that Amoled screens get screen burn ins, does samsung A7 get that too? The front camera is a piece of shit. It has only one function: selfie with locked focus even in video mode. This really sucks. Not because the phone has the best Samsung has on offer, but solely because it's the first time that they've had a triple-camera setup on the back of the phone, all for a price of Rs 23, Now that may not sound like a big deal for most, but for Samsung to introduce a new mid-range offering at that price is quite something.

While that automatically makes the camera, the biggest highlight of the Galaxy A7, there's certainly no skipping the fact that there's competition aplenty. But given Samsung's expertise with cameras and the capable hardware in the Galaxy A7, it sure had me excited to find out whether it really does offer enough to pull the crowd away from all-round packages like the POCO F1 and the Nokia 7 Plus. The question really boils down to, is it really as big a deal as Samsung makes it sound like or is this just another stroke of marketing brilliance from a brand that is really beginning to feel the pinch when it comes to mid-rangers?

The Samsung Galaxy A7 starts at a price of Rs 23, Now to talk about the part that matters the most here. Long story short, I was quite pleased with the camera performance of the Galaxy A7.


The camera app has a bunch of the usual modes to choose from. The UI also features shortcuts for Bixby Vision and Quick Share, which, as the name suggests, lets you share the image on social media platforms directly. Samsung's first triple-camera setup on a smartphone. Samsung has also bundled in a 'Scene Optimiser' function, something that they spent a long time talking about during the launch. It's basically a mode which automatically detects the scene and then uses a preset setting to capture the image in.

Samsung claims that can the 'Scene Optimiser' can detect 19 different scenarios and set the camera up accordingly. This is basically just another version of auto-intelligent mode that we see on many cameras. The image overall does look a little dramatic and not exactly true-to-life, but I didn't seem to mind much because the colour processing was rather subtle in comparison to the likes of say, the Xiaomi POCO F1.

The portrait mode on the Galaxy A7 is by far the best in the segment. The degree wide angle camera is also quite a neat option to have if you're cramped for space. It is only an 8 MP sensor so don't really expect to see a ton of detail when you're zooming in. Surprisingly, there's also no autofocussing here, which definitely hurts.

Also, because of the lens being so wide, there's definitely a considerable amount of barrel distortion which you can see in the images shot. The portrait mode or what Samsung calls "live focus" mode is also excellent. Edge detection is on point and the camera managed to get a pleasing image almost everytime I switched to it.

Skin tones aren't true to life though and there is a bit of artificial whitening which is present even with the beautify feature turned off. The dynamic range here is also better than any camera at this price point. In low light as well as under artificial lighting conditions, I personally prefer using the Pro mode, but if you are using the auto mode, you'll end up seeing a mixed bag of results.

Images are a little overexposed, with an awful lot of processing and aggressive noise reduction. White balance also often goes for a toss. However, it is definitely usable and as I mentioned, results using the manual mode are far more pleasing. Head over into the Flickr album below to see hi-resolution images captured using the phone under different lighting conditions. Selfies turned out fine under most lighting conditions but you might want to turn the beautify option off if you do prefer more natural-looking skin tones.

The portrait mode on the front camera was also just as good as the rear with accurate edge detection and commendable dynamic range. As for video, things are alright as long as you stick to p. There is a higher resolution of x pixels that you can shoot on, but there's no EIS at this resolution. Overall, there nothing to write home about here. I reviewed the Galaxy A8 Plus at the beginning of this year and as far as looks go, the Galaxy A7 looks almost identical from the front.

The sandwiched metal and glass design which we saw adorn the Galaxy Note 8 back in September and all subsequent premium offerings, finds its way to the Galaxy A7. The Galaxy A7 is a large phone. It's tall at mm and for a person with small hands, it is quite a handful. For a phone that tall, you would expect it to be quite heavy as well, but it surprisingly isn't. Weighing grams, it's not only lighter than most similarly sized phones, but it is also thinner than most phones at 7. The Galaxy A7 features a sandwiched glass design and an aluminium frame. 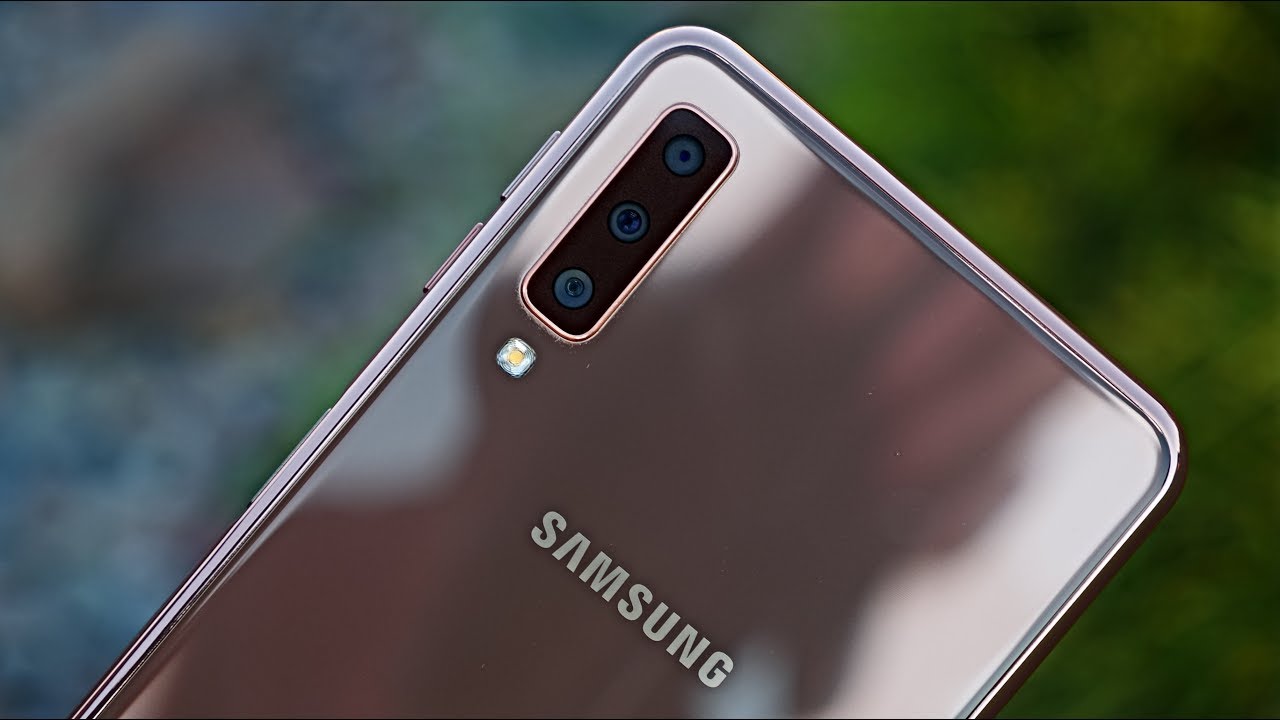 For the price, the Galaxy A7 also feels very premium and sturdy at the same time. The frame of the phone is made of aluminium and has a glossy coat of paint which you certainly can't scrape off too easily.

The camera module on the back does have a protrusion but isn't bad enough to have the phone wobble when typing with the phone flat on a table. The buttons and edges on the phone are rounded off perfectly, making it a very appealing device to look at.

The Galaxy A7 features a fingerprint scanner which is embedded into the power button. Samsung's Find My Mobile feature is here to help. It's free, and if you signed into your Samsung account when you first set up the phone, then it's already set up. Let's assume you still have the phone to hand. Instead of waiting for something unfortunate to happen, take a few minutes right now to ensure Find My Mobile is enabled and setup on your Galaxy phone or tablet.

Indeed, Google already offers a similar app for all Android devices, and there's nothing wrong with it, but Samsung's service for its own devices gives you more functionality. Note: Not all carriers support Find My Mobile. It may even already be installed. If you signed into your Samsung account during initial setup, like I said, odds are Find My Mobile is already turned on.

Check on your device by searching for Find My Mobile in the Settings app. If prompted, sign into your Samsung account to enable the feature. I suggest turning on all options associated with the feature as well.